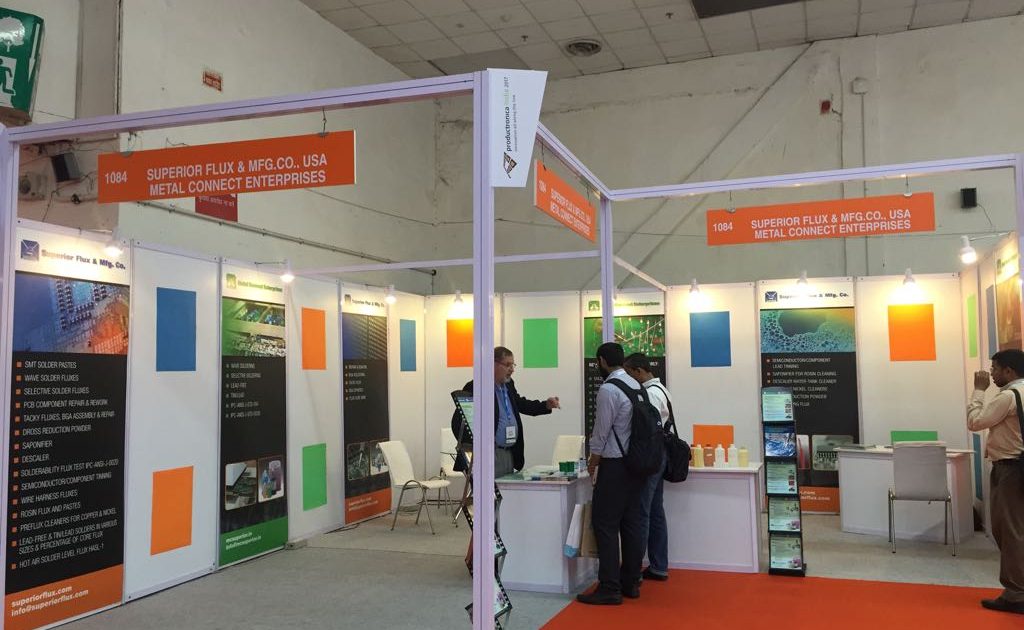 Trade shows are yearly extravaganzas for the advancement of electronics and production equipment and materials. Just a few short months ago MMI India Pvt. Ltd. held Electronica and Productronica India 2017 in New Delhi. A large number of visitors (nearly 18,000!) from many Indian states, 17 countries, and 650 companies came together to see over 450 exhibitors.

Superior Flux & Mfg. Co. (SFM), represented by our electronics guru Mr. Dana Imler, and our Indian partner, Metal Connect Enterprises (MC Superior), represented by industry veteran Mr. Biju Thomas, were among those presenting. Superior’s focus for this particular show was to reinforce our partnership with Metal Connect and more formally introduce ourselves to those in the northern states of India, for example, Uttar Pradesh, Delhi, Gujarat, Bihar, and more. Dana and Biju were leaders for this year’s show and represented the only companies to participate in the category of Manufacturers of Materials and Consumables for Electronics Soldering.

From September 14th to the 16th, both domestic and international participants from the industrial, research, and media sectors gathered in New Delhi at the Pragati Maidan Exhibition Center to connect with new and old partners and customers. The show had separate halls you could rent to schedule one-on-one meetings between buyers and exhibitors and open halls where prospective buyers and consumers could walk about from table to table.

Dana and Biju showcased fluxes for soldering, (general and BGA) , photovoltaic solar fluxes, solder pastes, fluxes for brazing , solder bars, and chemical cleaners. They saw visitors from both the corporate and production sides of companies and industries involved with space, railways, healthcare, the manufacturing of mobile phones, tablets, automotive parts, and LED products. There were also representatives from electronic manufacturing service companies (EMS), small product development teams, and resellers that stopped by.

Thank you to all those at and behind the show, friends new and old, and especially to Mr. Biju Thomas and Metal Connect Enterprises for a wonderful and successful show!

Fluxing in the Heart of Texas
Scroll to top