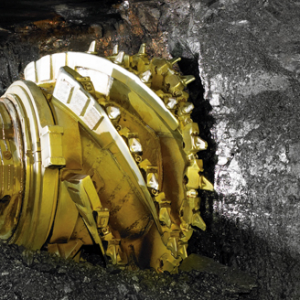 When we think about mining, we often think about a worker deep down in a mine, chipping away with a pickax.  While some miners still use manual tools, mining is increasingly accomplished by powerful, continuous and automatic mining tools – massive drills that cut through stone as though it were dirt.

Central to these massive, spinning behemoths are two primary materials, a steel shank and tungsten carbide bits.  The steel shanks form the body of the drill.  But steel, strong as it is, is no match for subterranean rock.  It’s the carbide bits that do the actual cutting and breaking.  Take a steel shank, stud it with carbide bits, set it spinning, and watch out stone!

So how do you join the tungsten carbide bits to the steel shank so that they can withstand the tremendous rigors of a mining tool?

The answer is brazing, a most amazing joining process that often gets overlooked, sandwiched as it is between high temperature welding and low temperature soldering.

Brazing produces powerful joints, even between dissimilar metals.  The American Welding Society (AWS) describes brazing as a joining process that causes the coalescence of metals via a brazing filler metal that has a liquidus temperature above 450⁰C/840⁰F, but below the solidus temperature of the base metal.  Notice the word “coalescence,” which is an apt way to describe a joint where a new metallic entity is formed, one that can actually be stronger than the surrounding metals.

The two key elements to a successful brazed joint (aside from heat) are the FILLER ALLOY and, of course, the FLUX.

When brazing tungsten carbide bits to steel to create a mining tool, silver braze alloys are often not the braze alloy of choice.  Rather, filler alloys are chosen that melt at higher temperatures than silver alloys.  Below are three recommended alloys for brazing mining tools.  Note that all three contain manganese, which plays a vital role in brazing carbide.  The braze alloy often comes in the form of a flat coupon or shim.

Once you have the right alloy, it is imperative that you choose the right flux.  This is where our No. 609LB Hi-Temp Brazing Flux comes in.

Hands down, our Superior No. 609LB is our most popular flux for brazing mining tools.   If you ask us, we’ll tell you freely that it’s the best flux of its kind in the world.  We sell it both within the USA and internationally: China, Poland, South Africa and Mexico, to name a few countries.  Our customer list for No. 609LB is growing and already includes many of the largest mining tools manufacturers in the world.

No. 609LB is water-soluble, for ease of use.  Many users simply coat the carbide bit with No. 609LB, position them on the shims within formed pockets in the steel and braze away.  No. 609LB is active between 760-1230⁰C/1400-2250⁰F.  It promotes reliably strong joints between the steel shank and carbide bits.  After heating, the brazed tools are quenched in water.  The flux residues from No. 609LB either come off in quenching or when the tools receive their final cleaning.  The result is a strong, reliable joint worthy of the task ahead.

Nothing needs strength more than a carbide mining tool going through solid rock.  And nothing promotes a stronger brazed joint between carbide bit and steel shank than our No. 609LB.

To learn more, take a closer look at No. 609LB (Main Page, SDS, TDS) and our extensive line of other Brazing Fluxes (Main Page).

The role of a flux in industrial soldering